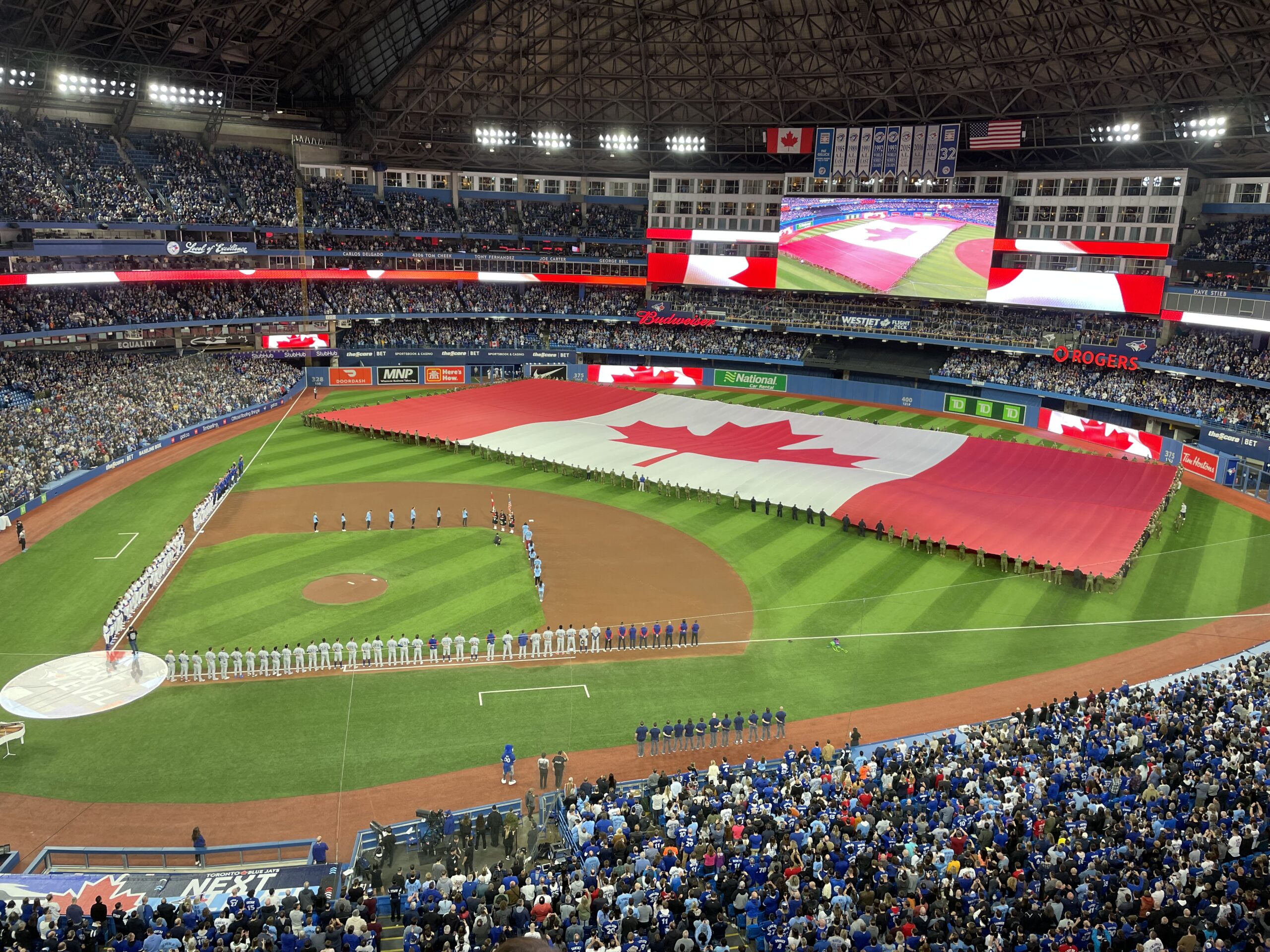 Was that the best home opener ever? Certainly the best in the last 10 years. Such a brutal start, followed by such a great comeback, and the an all time save scenario in the 9th inning too. It had everything you could ever ask for.

As mentioned Friday, I got to go to the home opener. Only my second time in live attendance for the opener. Home Openers are always my favorite. I got to the ballpark nice and early. Saw some of the Rangers batting practice, collected my free hat, stopped by the Sportsnet Studio, and took in the new “Next Level” big screen. Boy what a beauty that it. The clarity and the contrast and brightness make a huge noticeable difference, but the biggest thing is just how much more data it can display. You get the full batting history for the player at bat. For pitching, in addition to speed, there is now get pitch type, and velocity information also.

I really enjoyed getting to to see the silver slugger awards being handed out to Teo, Vlad and Marcus Semien. It still blows my mind to think we had 3 silver sluggers last year, AND a Cy Young award. Nice and fitting that Marcus ended up being here on opening night to receive his with the other two.

I forgot to check if Robbie Ray got his award yet or if they’ll wait until he is here with Seattle later in the year. Either way I’m sure there will be some type of video appreciation video. I was glad too that Marcus was able to get a nice reception (the only for any ranger) when the teams were announced, as we were unable to give him an ovation in his first at bat, due to the horrific HR that proceeded it.

God that first Inning was bad, and absolutely NOT what you want (or expect) to see from your stud ace. From a “glass half full” perspective, Jose will be well rested having only pitched 32 pitches. But he’s got a long road ahead of him to reduce the 108 ERA!!

You hear at the start of a season, mangers often talk about the need to try to get everyone some playing time and let them get into their seasons. Well Friday certainly allowed for that. I think Charlie did a brilliant job managing the bullpen also. He so easily could have totally burned an arm and left someone out there for 3-4 innings, but instead chose to really keep everyone’s pitches low, get more involved and the pen paid him back with a excellent outing.

Gausman had a solid outing Saturday also. He did a really good job. Ryu actually unfortunately gave me what I expected from him Sunday. He more than others was going to suffer from the shorter spring. He turned the corner last year towards old man slipping away from his best, and I expect a further decline to come. That’s not to say he’s done, or will be awful. Just that he’s certainly the number 3 (maybe even 4), only two years now removed from being the star number 1.

Still all told, we opened the season with a series win, and that is the job done. 162-0 is a lovely dream, but playoffs will be made or missed based simply on winning series.

The first big test then begins tonight. Four games against the Yankees in the Bronx. I’d circled this one in during the preseason. This will be a real good test of just where we are at. At minimum 2-2 split for any real post season hopes, with 3-1 really being preferred. We swept the preseason 4-0. Could we do it again now?

Danny Janson with 2 early HRs is now on the DL, causing a bit of a shuffle in the active roster today. I prefer Kirk, I’ve made no lie about that. But do I want Danny or Zack Collins behind the plate in New York as the other catcher? You bet your life I want Danny. Lets hope we can stay out of the bull pen a little more this series. Its one thing to get everyone involved, another to burn them out in April. I trust Manoah tonight, but Kikuchi followed by Berrios gives me cold sweats for what we might need from the pen. Hopefully I’m wrong.

Ok, until Wednesday.. thanks for reading.