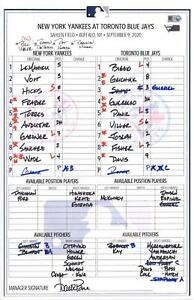 With one week until opening day each year I will put together my predictions and opinions on who I think will (and should) be breaking camp with the Toronto Blue Jays and making the opening day roster.

Unlike previous years, this year the team almost seems completely set. Aided by the additional 28 man April roster spots for this year. It has meant any “races” we might have seen, are just everyone gets a spot.

Some ground rules: I’m going to list the plays I expect to break, with some commentary in places where I personally would prefer another player.

No need for a magic ball here. The Blue Jays announced the opening rotation yesterday, along with José Berríos as the opening day starter. I’ve grumbled before about Kikuchi. He goes again today, so hopefully he shows us something then that we’ve not seen yet, cos I really don’t think he’s any better thus far than Pearson for example.

So first sort of stab in the dark here with Greg Bird. He’ll need a 40 man spot, (we have two available), but I honesty thinks earned it, and I think the Jays see if that way too. Whether or not he can make the cut come May 1 only time will tell. I would hope so, as I’ll get to when we talk catchers later.

So there is a case to be made here that maybe the 15 spot goes to Dexter Fowler if he’s ready. I just don’t expect that he will be ready that quickly, so I expect to see Tapia open the season, but he’ll need to play well to hold his place.

So I deliberately named Kirk ahead of Jansen. In my eyes he’s our best catcher, and I expect him to take the majority of the starts behind the plate this year. I also expect to see him DH on days Jansen is catching. McGuire is the awkward part here. I don’t like having 3 catchers on the roster, even a 28 man roster. But with no options left and unlikely to clear wavers the Blue jays are stuck at least for now with needing to keep him on the big league team. My hope is the find a spot before May 1 when then think they could sneak him throw wavers and send him to Buffalo, as I would prefer to see Bird stay and one f them for sure will be cut then.

Its all but certain that the Blue Jays will open with a 10 man pen, and the first six names here I think are an absolute sure thing. I’m also happy to have all six. For the final four I think Borucki makes it. A left handed long inning guy might well be needed in these opening weeks, but with options available his leash will be short. Same for Stripling. And then for me, and I expect the Blues Jays too, Castro and Climber have done nothing to exclude themselves.

I think positionally next men up are Nathan Lukes and Dexter Fowler. I don’t expect Fowler to be fit in time, and I think Lukes could use a few months of AAA before coming up, so while neither would be shocking to see in Toronto next Friday, I don’t expect either will.

For pitching, I have Julian Merryweather and Trent Thornton missing out. For me, neither has been good enough and I wouldn’t pick them, but perhaps one could take Borucki’s spot. I hope not but well see.

So like I said, not many talking points this camp. Which I guess in a way is a talking point onto itself. This team is just set. Its ready. Its hungry and I can’t wait for the Movie To Begin.

Finally as I write this the Jays have announced the extetion of Charlie Montoyo through the 2023 season. Congrats to him, I like the show of confidence to begin the year off. I think he’s the right man for the job.

Til next week, thanks for reading.