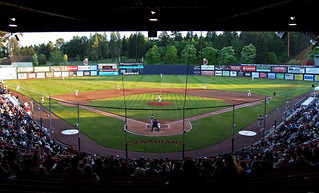 The one thing this lockout will steal from me this year no matter how (and when) it ends, is a complete Spring Training. Sure there will be some pre-season training and warmups, the MLBPA will never allow the players to go into meaningful games ice cold, but it’ll be far shorter than it otherwise would have been. I absolutely love spring training. Crazy I know, but I’m a sucker for it. The ‘Single A’ ballparks with the limited camera angles, the stripped down uniforms and hats. I’m all in! It just fells like more of an authentic baseball. And there will be less than there should be this year.

Some of you no doubt will quip in makes up for the over use of the minor league parks these past two years, and I can’t really argue with that. I can’t wait to see what this team can do with a full year in Toronto, but there is something so nostalgic and simple about minor league parks. Its criminal to think how little games Vlady, Bo and company have actually played in Toronto.

As I mentioned in last Friday’s blog, my first taste on “real” baseball didn’t come until I was 20. Prior to that everything I knew came from movies, such as Eight Men Out, A league of their own, The Natural and The Babe. I find something captivating how in some ways how little the game has changed. During the time I spent at Wrigley Field I couldn’t help but feel the history, thinking about the players that played on that very field up to 100 years before.

That’s why I love Spring training I guess, it’s so much closer to that raw authentic baseball, without all the commercialization that comes with “The Show”. Hearing stories of players bussing it from park to park reminds me of when away games were attended by train rather than private flight. I listen to most of Spring training on the radio, as so little is televised, (another throwback) as well as all the games are played at 1pm in the daylight. Side note: I listen to a lot of regular season games on the radio too. The Fan 590 team do an amazing job.

Hopefully if I can get to enough games this year, Rogers center will become my most visited ballpark. To date that acclaim still belongs to Nat Bailey Stadium from my time in Vancouver. God I really loved that stadium. “Authentic”. There just isn’t get away from that word, there is something really authentic about these smaller stadiums. The crackly muffled tannoy, the outfield sign for Tom’s Butcher Shop, or Bill’s Barbers. It’s just a feeling no MLB stadium can recreate.

Right before the pandemic hit, I was lucky enough to stumble upon the Intercounty Baseball League. There was the cheesiest smile plastered on may face for the entire game. You sit so close its like you really are in the game. You can smell the pine tar and the resin, ( and the Tabaco spit). You hear everything said in the dugouts. Granted it was no bat flip game, but it was one the most fun professional baseball experiences of my life.

So yeh .. I’m really sad there is going to be less spring training, this year. And this time not because of a health pandemic. No this time instead its because of the pandemic that is the greed of the MLB franchise owners. You know, the more this lockout goes on, the bitter I get. Hopefully we’ll get some good news this week, the weekend bore nothing, not too unexpectedly.

‘Til Wednesday… thanks for reading.